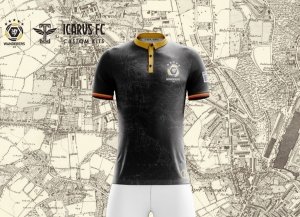 Wanderers are pleased to share the club’s exciting new Limited Edition Kit, which uses the winning design from the recent design contest. Designed by Italian, Giuseppe Bua, and manufactured by American company, Icarus, this eye-catching kit incorporates the 1870 Ordnance Survey map of Upper Norwood, West Norwood, and surrounding areas, focusing on the home ground in the middle of the chest.

The map is replicated in silver and a gold three-button collar adds a vintage touch, along with symbolising the three consecutive FA Cup wins between 1876 and 1878. The Wanderers badge is embroidered and the sleeves piqued with Wanderers traditional colours of gold, pink, and black.

Inside the collar are the map coordinates of the new pitch, which, with a little mathematical magic, round up to the number 5; symbolising the number of FA Cup wins the club achieved between 1872 and 1878. On the front, bottom left, is a stylised GB in gold; the initials of the designer.

The rear is broken into 5 hoops for each FA Cup win and a printed, gold icon on the nape of the collar commemorates the club’s 160th Anniversary with 1859 and 2019 printed either side of an image of the original FA Cup trophy. The left sleeve bears the FA Football For All emblem, reminding the wearer, teammates and supporters of the club’s Charter Standard Status and desire to provide inclusive football for people of all backgrounds.

There will be only 59 shirts available to purchase – either online via Footballkitbox or in person at matches.

Each shirt will come in its own specially commissioned Kitbox and includes a free yearly membership to the Wanderers Supporters Club. Find out more about the supporters club benefits here : http://www.originalwanderers.com/post/become-a-wanderer

Away Days
Scroll to top

Our website uses ‘Cookies’ for a variety of different purposes, including the gathering of analytics to analyse and improve our website’s performance. More information can be found in our Cookie Notice

We may request cookies to be set on your device. We use cookies to let us know when you visit our websites, how you interact with us, to enrich your user experience, and to customize your relationship with our website.

Click on the different category headings to find out more. You can also change some of your preferences. Note that blocking some types of cookies may impact your experience on our websites and the services we are able to offer.

These cookies are strictly necessary to provide you with services available through our website and to use some of its features.

Because these cookies are strictly necessary to deliver the website, refuseing them will have impact how our site functions. You always can block or delete cookies by changing your browser settings and force blocking all cookies on this website. But this will always prompt you to accept/refuse cookies when revisiting our site.

We fully respect if you want to refuse cookies but to avoid asking you again and again kindly allow us to store a cookie for that. You are free to opt out any time or opt in for other cookies to get a better experience. If you refuse cookies we will remove all set cookies in our domain.

We provide you with a list of stored cookies on your computer in our domain so you can check what we stored. Due to security reasons we are not able to show or modify cookies from other domains. You can check these in your browser security settings.

These cookies collect information that is used either in aggregate form to help us understand how our website is being used or how effective our marketing campaigns are, or to help us customize our website and application for you in order to enhance your experience.

If you do not want that we track your visit to our site you can disable tracking in your browser here:

We also use different external services like Google Webfonts, Google Maps, and external Video providers. Since these providers may collect personal data like your IP address we allow you to block them here. Please be aware that this might heavily reduce the functionality and appearance of our site. Changes will take effect once you reload the page.

The following cookies are also needed - You can choose if you want to allow them: